Intel has today taken the wraps off the Optane SSD 900P Series, launching initially in three different SKUs and in conjunction with Star Citizen.

Based on the existing Intel Optane SSD DC P4800X enterprise-grade drive, the 900P, as the full name suggests, utilises Intel’s Optane technology, specifically the 3D XPoint memory it co-developed with Micron. 3D XPoint is not a new implementation of flash-based 3D NAND; it is an entirely new and different non-volatile medium that has considerable advantages over the ageing NAND technology, specifically very high endurance and very low access latency. The downside at the moment is cost, and thus far it's been reserved for enterprise SSDs, only recently finding its way onto the desktop in the form of small (16GB and 32GB) caching modules for use with its 200-series chipsets and later.

The SSD 900P, however, is the first fully fledged Optane SSD for the consumer market, although to be clear it's very much the high-end consumer market, with Intel targeting applications like engineering, professional content creation, and game development as well as those gamers and enthusiasts with deep wallets and an insatiable desire for the latest and greatest. It will be available as a PCIe add-in-card (AIC) in 280GB and 480GB capacities and as a U.2 2.5” SSD in 280GB only, as least initially. The 280GB SKUs will launch at $389 (~$1.40 per GB) and the 480GB will cost $599 (~$1.25 per GB). As we said, premium stuff. 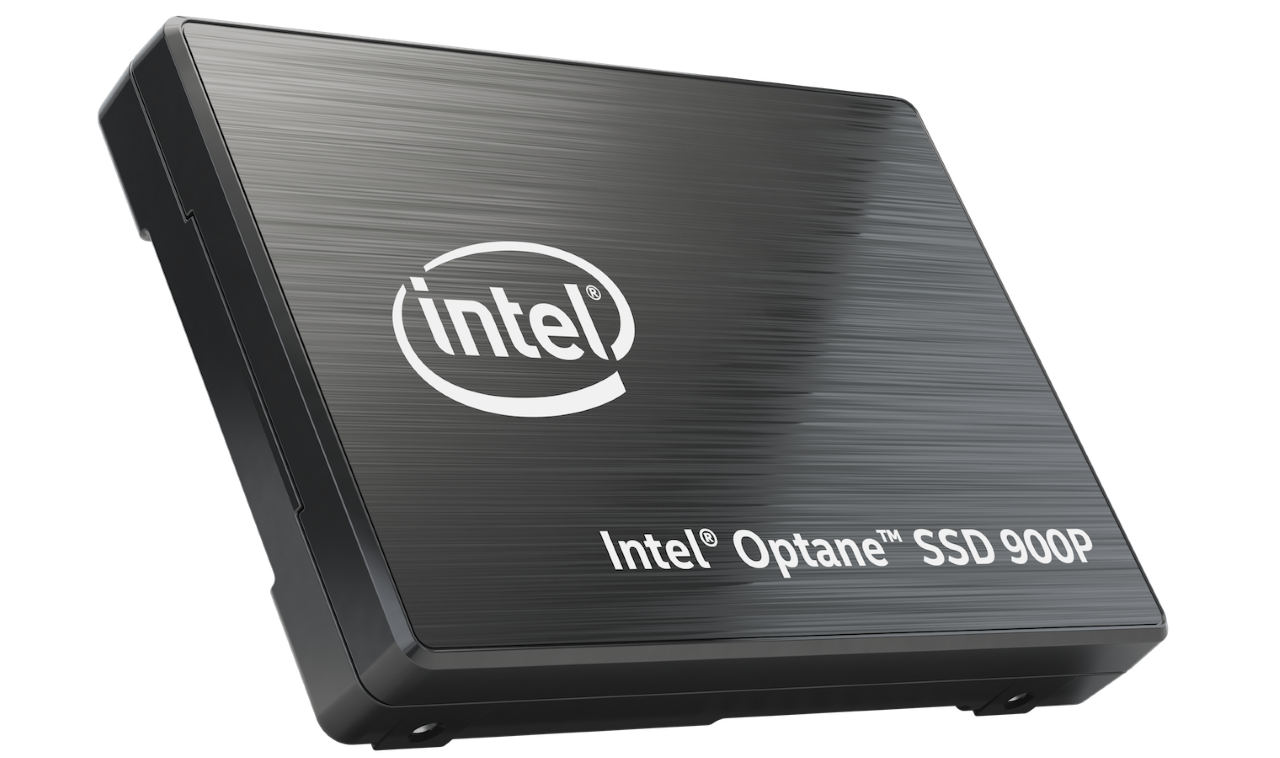 The specifications are certainly impressive, with Intel promising up to 550K and 500K IOPS for random 4K read and write operations respectively, 2,500MB/s and 2,000MB/s for sequential read and write operations respectively, and access latency of under 10 microseconds. There is no performance difference between the different capacities. Advantages over traditional NAND drives will most be felt at low queue depths and in random read and write performance, which makes it very suitable for the client space. An Intel-produced benchmark using the Houdini rendering application pointed at a 2.7x faster rendering time compared to the Samsung 960 Pro.

The SSD 900P is a reconfiguration of the DC P4800X, using the same proprietary Intel NVMe controller but with different firmware and different features so that behaviour better targets client workloads. It runs over a PCIe 3.0 x4 interface.

The drive's endurance is equivalent to 10 full drive writes per day for five years, which equates to 8,760 TBW (terabytes written) for the 480GB drive and 5,110 TBW for the 280GB. Intel also says that performance consistency as the drive fills is another area where it will shine.

Intel has partnered with Cloud Imperium Games subsidiary Roberts Space Industries (RSI), marketers of the upcoming Star Citizen sandbox MMO, for this launch. Those who buy the SSD will get access to the game (excluding the single-player Squadron 42 campaign) and an exclusive Sabre Raven ship, playable in version 3.0 (yet to be released). The ship comes with lifetime insurance to protect against theft and loss. The game is said to benefit from the Optane SSD 900P's performance and from further future optimisations, although specifics beyond loading times and smooth gameplay are thin on the ground.

'The Intel Optane SSD 900P is amazingly fast, easily the fastest drive I have ever used. Our Star Engine developers have been working on technology to improve loading times using new techniques developed for Star Citizen and optimised for Optane, the fastest SSD we've tested with the game,' crowed Chris Robers, chairman and CEO of RSI. 'We continue to enhance Star Citizen so the performance benefits with Optane drives will continue to grow, alongside Star Citizen, into the future.'

The SSD 900P should be available now in all three SKUs, although UK pricing was not confirmed prior to launch.

Will ship through to December.