The GTX 1070 Ti launched earlier today for £420, offering some solid competition for AMD’s Radeon RX Vega 56, which has recently seen a price drop in anticipation of this somewhat obvious move from Nvidia. With it comes the usual range of SKUs from Nvidia’s various board partners, and riding along at the very top of these is, as usual, the Asus Strix offering, coming in at £500 – potentially troublesome given that GTX 1080s (admittedly basic ones) can be found for less than this.

Nvidia board partners are in a strange situation with this card, as Nvidia has prevented them from offering cards that ship with factory overclocks. Take a look at the listings on any etailer, and you’ll see that all are listed as having the reference core clocks of 1,607MHz base and 1,683MHz boost and a memory speed of 8Gbps, including this one. Companies can get around this by offering an OC profile in their overclocking software, and Asus has gone one step further with this Advanced SKU (there is a regular ROG Strix version too) by binning the chips and offering this card with an OC profile that is higher, specifically 1,683MHz base and 1,759MHz boost. The memory is left at 8Gbps, however, which is unfortunate. Still, you have to install GPU Tweak II and specifically select the OC Mode profile for these speeds to be applied. 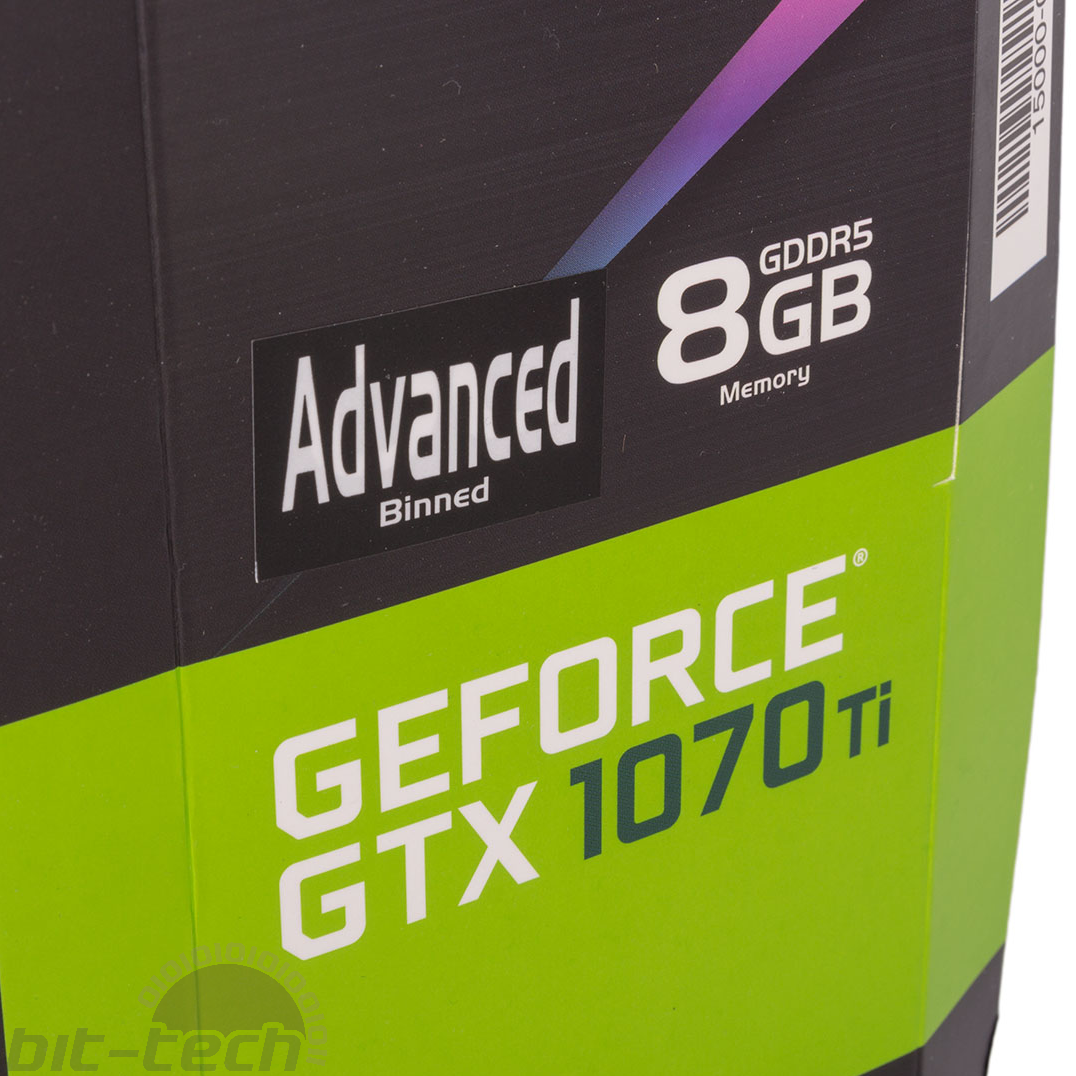 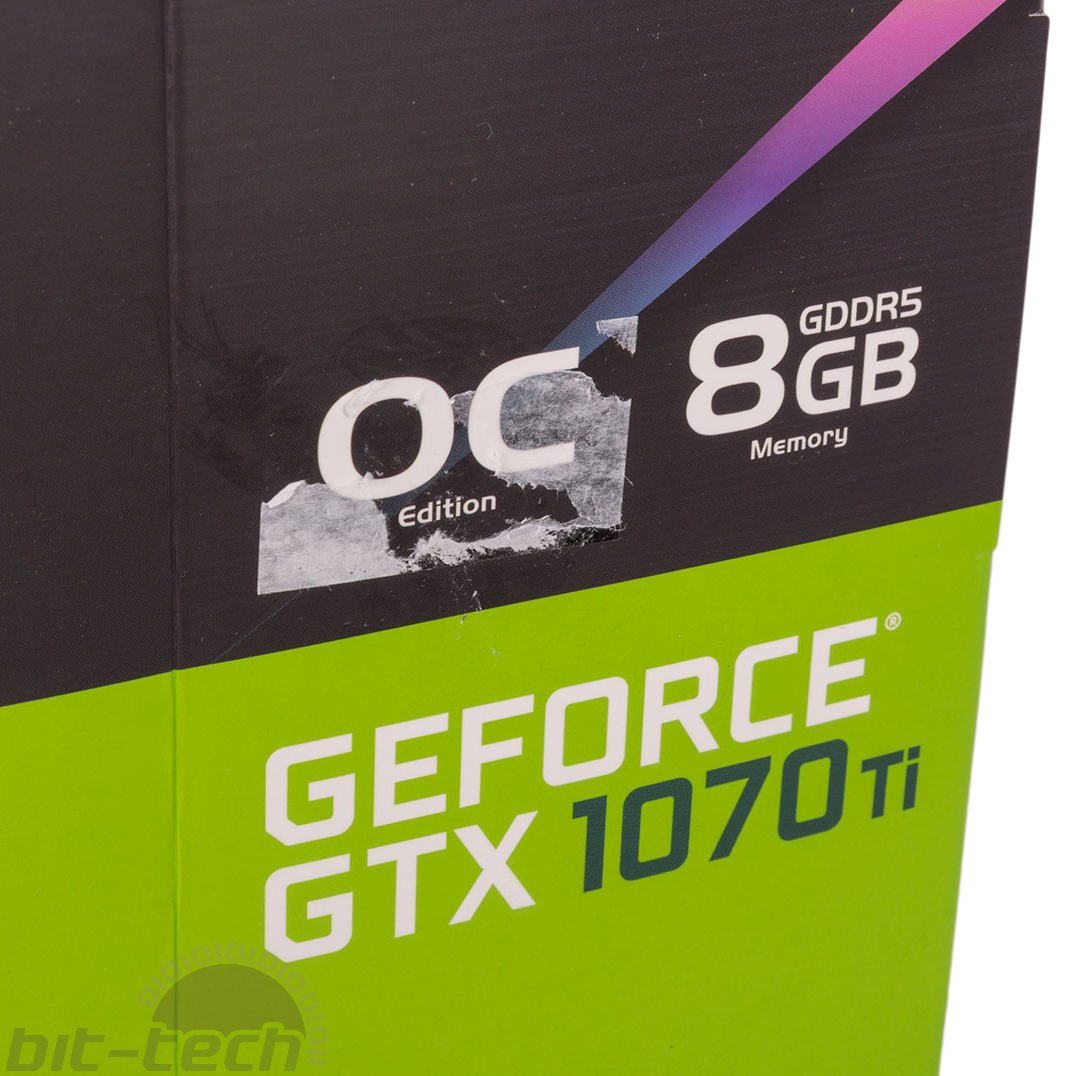 This decision is the first we know of for the premium GPU market and hopefully not a sign of things to come. Presumably, it’s a means of keeping space between the GTX 1070 Ti and the GTX 1080, but it appears to have caught partners by surprise. The packaging for our Asus card literally has a series of ‘Advanced Binned’ stickers placed over parts that originally said ‘OC Edition’, indicating that the initial plans were for properly overclocked SKUs to be sold. While we appreciate Asus’ efforts to subvert this limitation and make the best of it, even the OC Mode on this Advanced SKU is less than we’d expect from a normal Strix OC card. It’s a problem shared by all premium GTX 1070 Ti SKUs, as they’re not able to offer compelling speed bumps over basic models. It remains to be seen whether this will deter consumers or not, and a lot will depend on pricing which has been pretty volatile recently.

The GTX 1070 Ti ROG Strix Advanced has Asus’ latest Strix cooler design, making it a 2.5-slot card (triple-slot, effectively speaking) that’s 298mm long and 134mm tall. Those are pretty hefty dimensions, so it’s worth checking your case can house it.

Build quality is as high as ever, and the card is solid through and through. The metal backplate is a real necessity given the bulk and weight of the card, and it has the added advantage of dissipating heat and bolstering aesthetics.

VR-friendly display outputs see three DisplayPorts from the reference design dropped to two to make way for a second HDMI port instead, meaning you can have a VR headset and an HDMI-based display connected at the same time.

No deviation has been made from the single eight-pin PCIe power input, and given that this gives the 180W TDP card 225W of available power, anything more would have been overkill and unnecessary.

It wouldn’t be a Strix card without some RGB lighting, and as we’ve seen before both the main cooler fascia and the backplate get the treatment, so whichever way round you have it in your case it should make an impact. It’s all controlled through Asus Aura Sync, although there’s no onboard RGB header for connecting addition RGB strips too like with saw on the GTX 1080 Ti ROG Poseidon. Still, it’s probably our favourite RGB graphics card solution, and the neutral colour-scheme elsewhere removes the possibility of colour clashing.

Moving to a 2.5-slot design for the massive heatsink allows Asus to offer 40 percent more surface area to cool down compared to the previous-generation design. The large baseplate, meanwhile, features the company’s MaxContact technology, essentially a precision-machined surface that is said to be up to 10 times flatter and offer twice as much contact as other designs, whatever they may be. The large heatsink also makes contact with the VRM circuitry, while a metal plate draws heat away from most – not all – of the memory modules.

Three of Asus' patented Wing-Blade fans, which are IP5X-certified against dust intrusion into the motor, cool the heatsink apparatus. The open shroud means most airflow will be recycled in your chassis. The fans are all semi-passive and will switch off completely whenever the GPU is below 55°C, which covers all light and idle workloads.

The high quality PCB is manufactured on Asus' fully automated and flux-free Auto-Extreme process, with Asus now citing a 30 percent reliability improvement since its introduction – precisely how that's measured, however, isn't made clear. Asus appears to be using a beefy 6+1 phase power delivery system with Digi+ VRM control and Super Alloy Power II components including chokes, capacitors, and MOSFETs.

One final feature that we've become accustomed to is FanConnect II, essentially a pair of four-pin fan headers on the PCB that allow to control DC or PWM fans based on the GPU temperature. It's basically a more precise means of controlling airflow for fans that might affect GPU temperatures – if you're obsessed with tinkering with every last detail, it's a feature for you.

The card is supplied in the box with some Velcro cable ties. Of more value, however, is Asus' current Assassin's Creed Origins promotion, which this card qualifies for. Users can redeem a code for the game with all valid purchases, and this has resell value even for those who aren't interested in the game itself.

Finds its laptops a little dirty.

Custom Vega is finally, finally here. Can Sapphire deliver the goods with its monstrous Nitro+ card?

Inno3D looks to balance features and price with this version of Nvidia's latest GPU.