Intel’s Z370 platform has finally brought more than four cores to its mainstream offerings, and although pricey it has been largely well received, especially from a gaming perspective. It’s little surprise, then, to see many system integrators trying to capitalise on this. With us today is the Cube Nighthawk, Cube being the premium SI brand of box.co.uk – check our introduction article for more information. With an overclocked Core i7-8700K and a GTX 1080 Ti under the hood, the Nighthawk has very similar specs to the Overclockers UK Gaming Germanium that we saw last week, which will make for some useful points of comparison. At £2,650, it’s certainly not cheap, but neither is the hardware inside – let’s delve in.

Cube has gone all-out with regards to RGB. 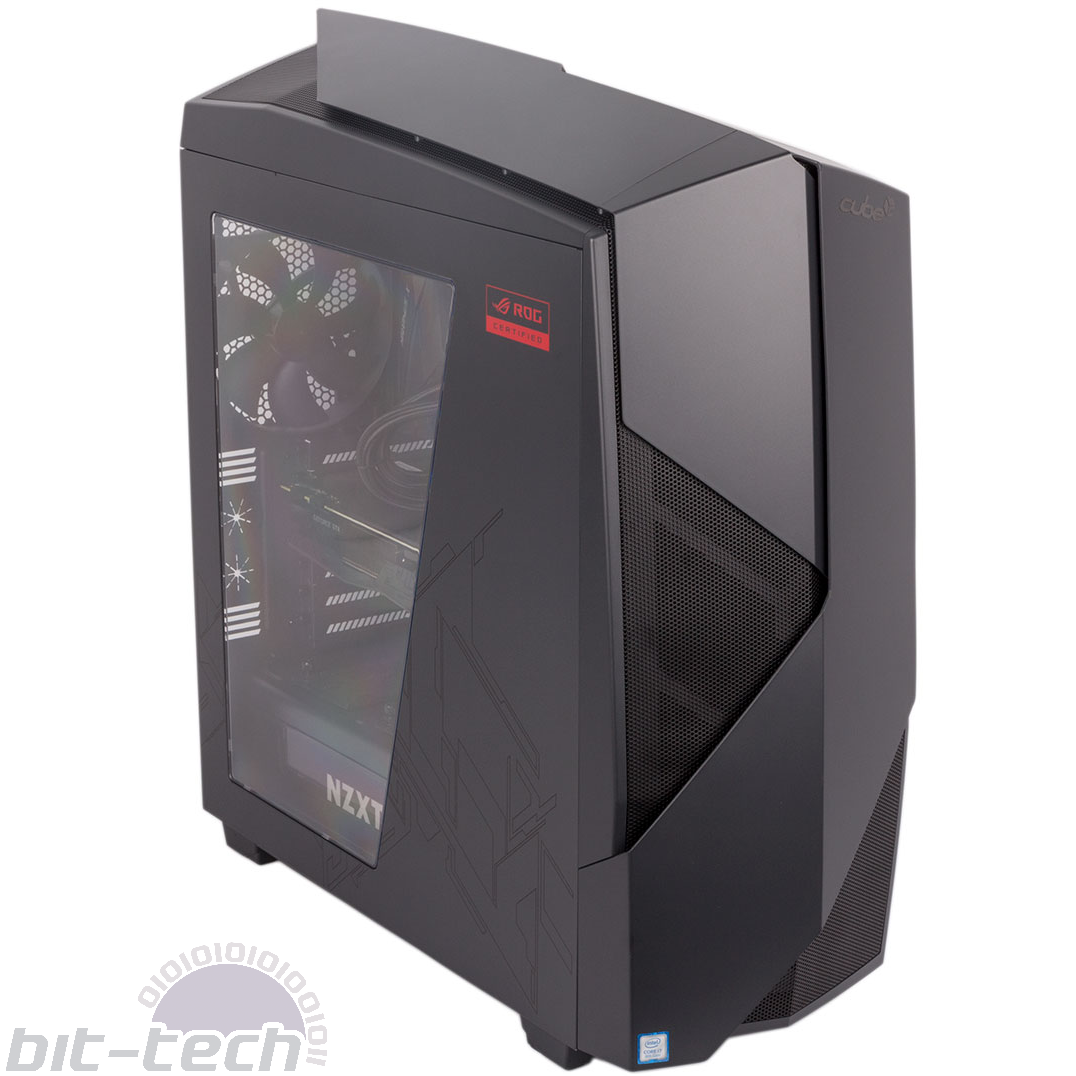 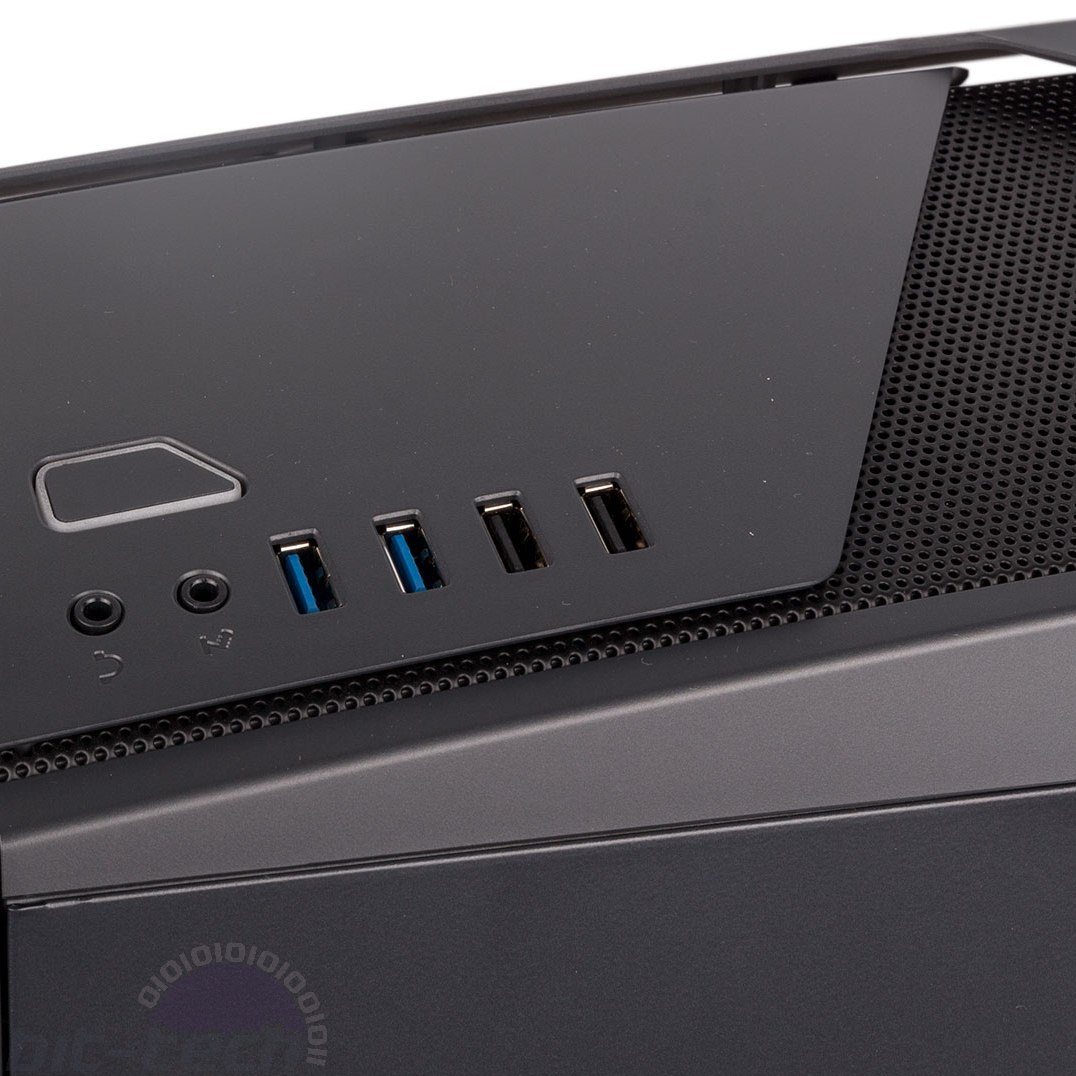 The NZXT Noctis 450 ROG case is the first evidence of this. It’s a very good case in most regards, even though its price put us off recommending it in our original review, but we did note that ‘it's a great candidate for an RGB-tastic Asus build’, and that’s exactly how Cube has used it. It has six separate RGB lighting zones – two underfloor strips, two in the main cavity, one illuminating the NZXT logo, and one for the power LED. All are synchronised via a single control panel that you can hook up to Asus Aura motherboards. 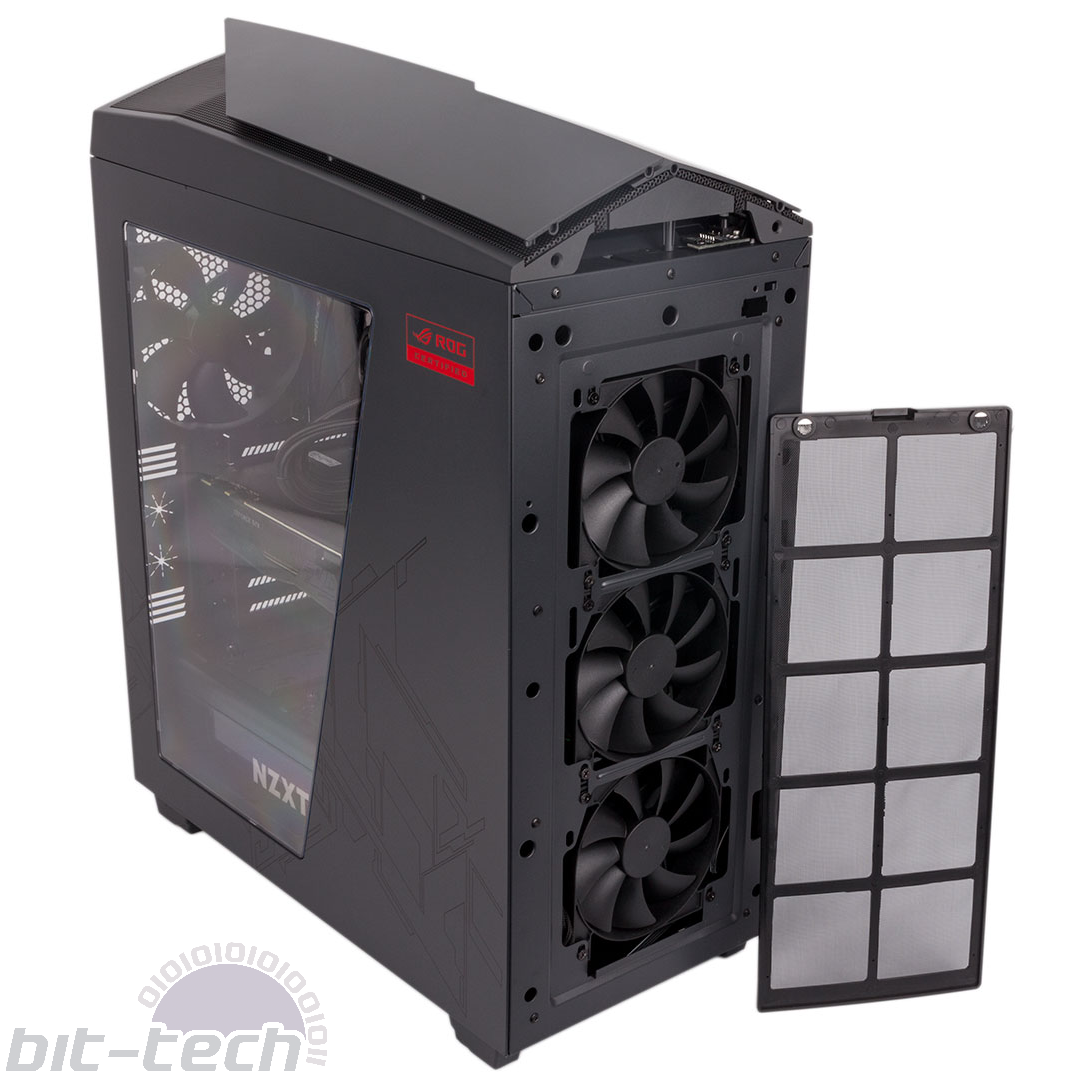 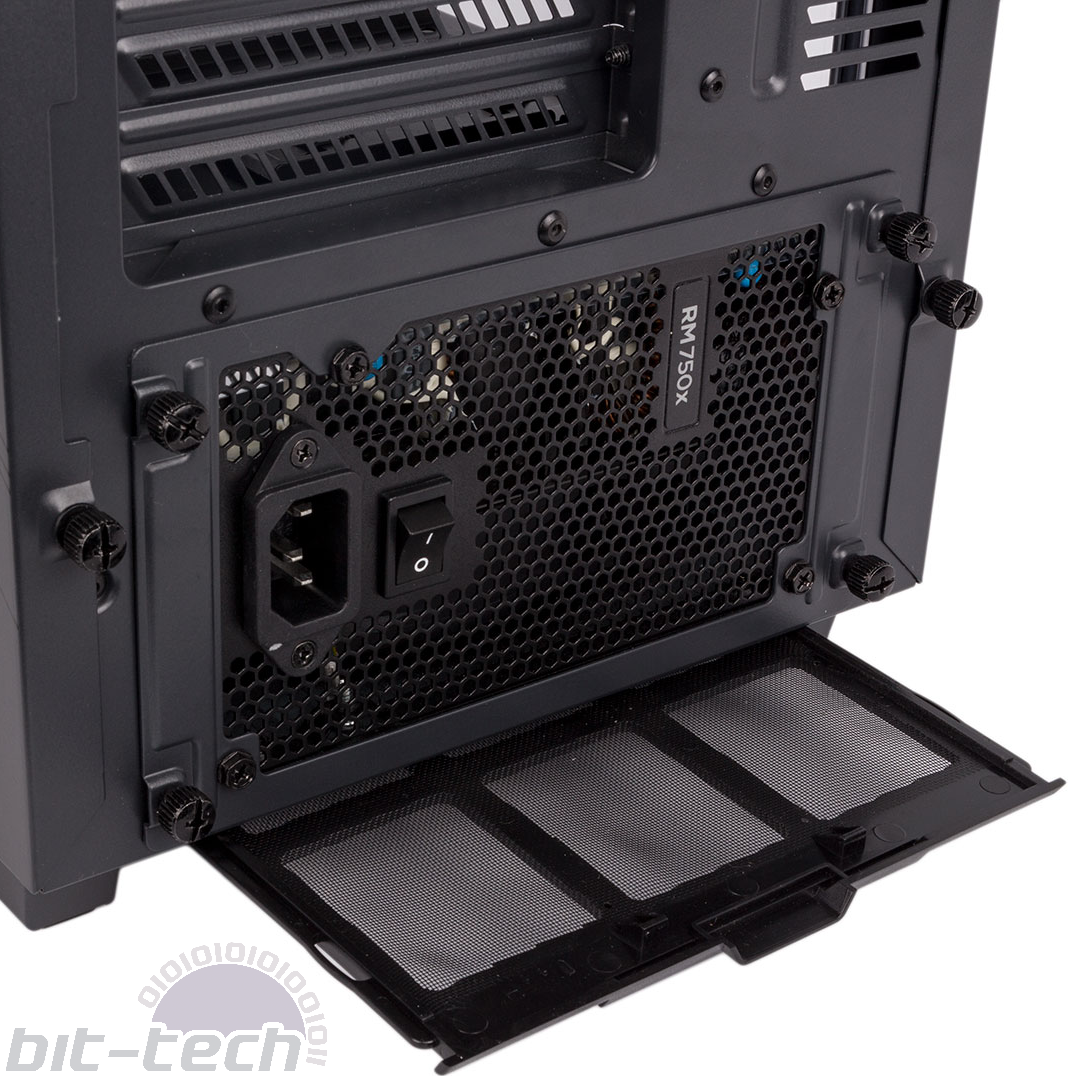 The motherboard Cube has opted for is the potent Asus ROG Maximus X Hero, a step up in terms of specs over the Z370-F Gaming used by Overclockers UK. It has USB 3.1 Type-A and Type-C ports, a USB 3.1 header, and dual M.2 ports. You also get stylish rather than garish RGB lighting in three places: the enlarged I/O shroud, the M.2 heatsink, and the chipset heatsink. One RGB header is used to control the case lighting. The PCIe slot spacing means there’s room to opt for an SLI setup at a later date. 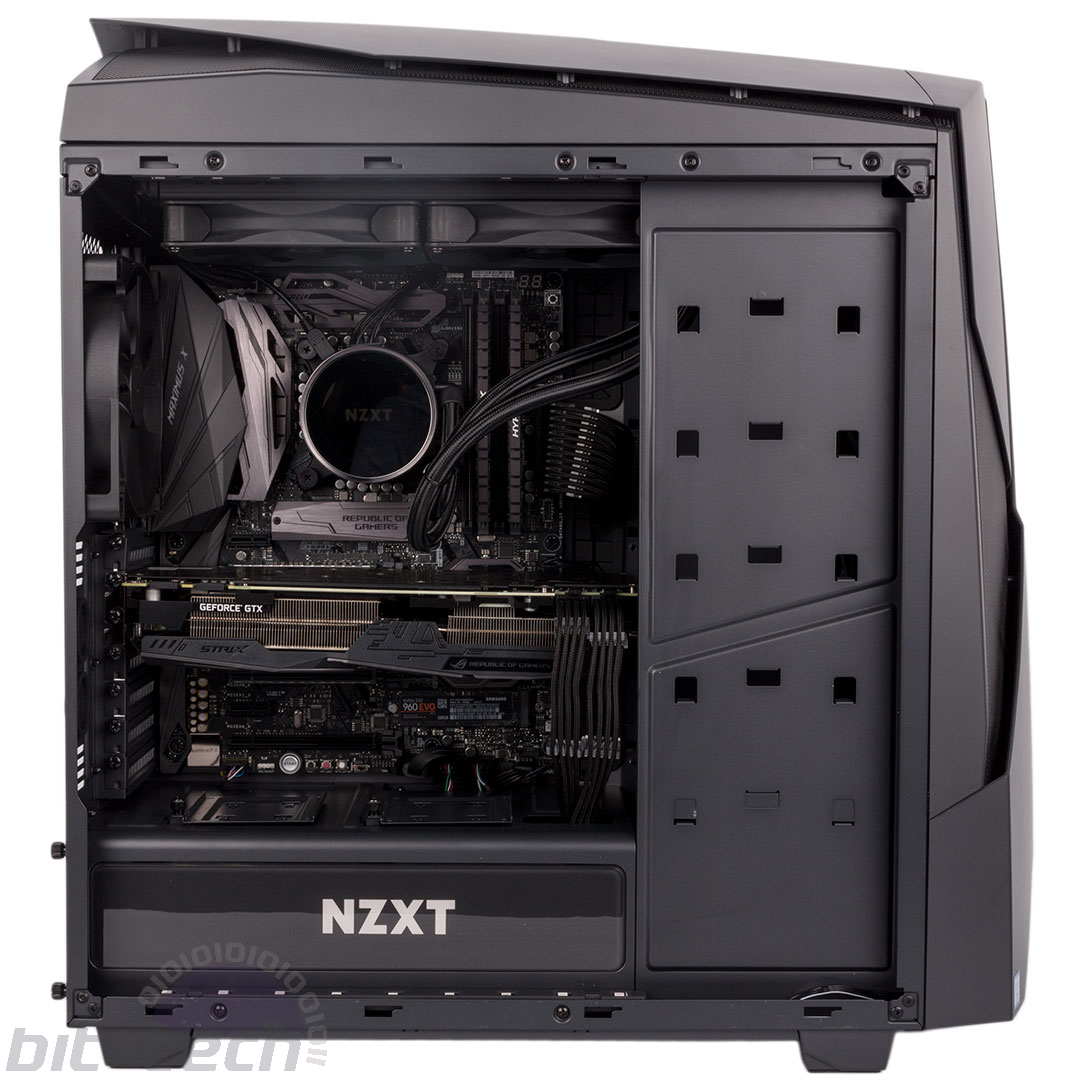 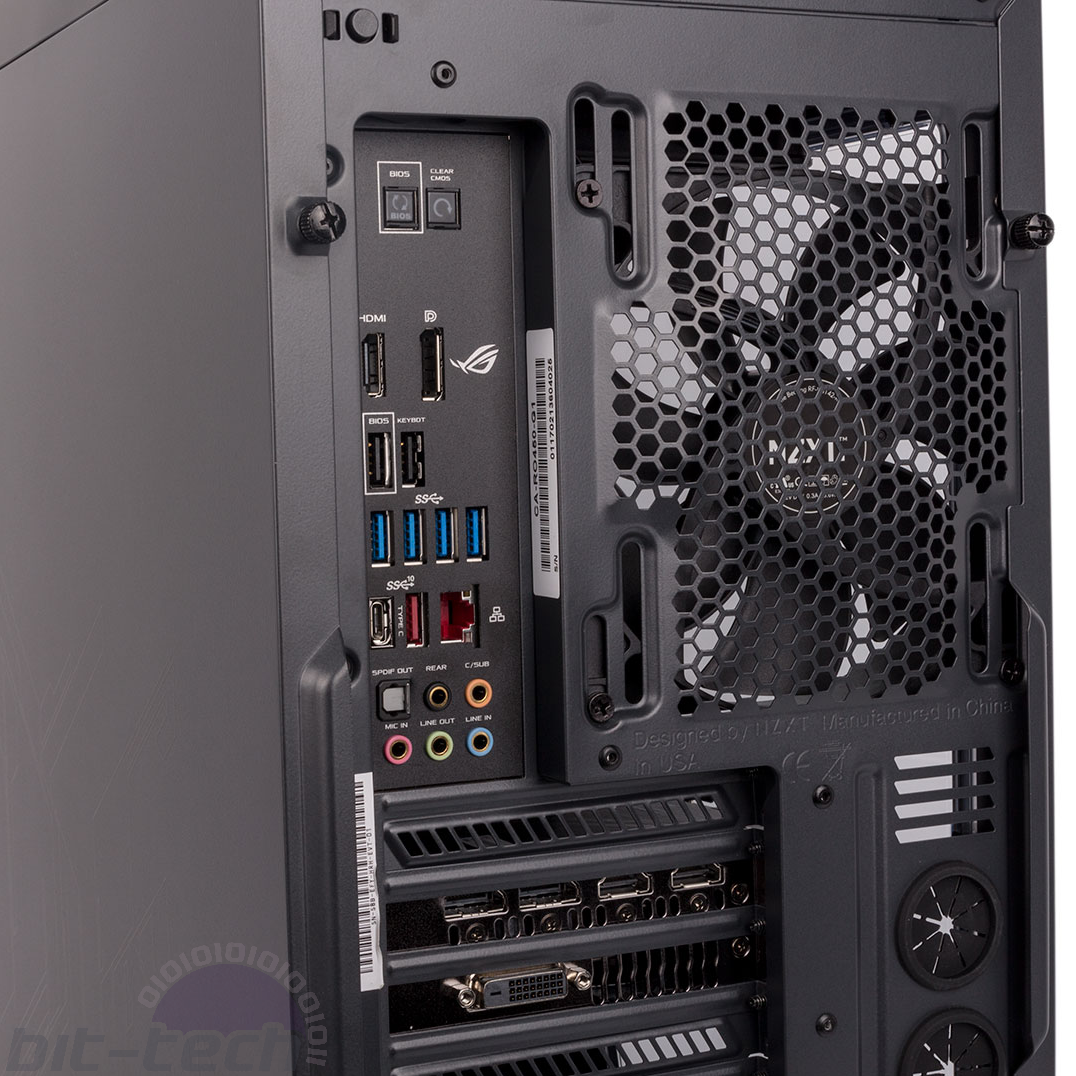 Sitting in the motherboard is the flagship Coffee Lake CPU, the Core i7-8700K, a fine choice for a gaming CPU with solid general-purpose capabilities as well. This arrived running with a nippy 4.9GHz all-core overclock using a vcore of 1.36V – a little high compared to what we need to reach 5GHz with our chip, but we’re hearing that retail samples aren’t as good as review ones. Cube also set a load-line calibration of level 5 but didn’t apply an AVX speed reduction like OCUK. Sadly, our torturous Terragen 4 test proved too much for this overclock, so we had to reduce the overclock to 4.8GHz for stability, and this is the speed all the result are based on. This is still very fast (and the same speed as OCUK’s system), and sometimes even Prime95 won’t trip a system where Terragen does, but it’s still a bit disappointing – we’re sure Cube will be implementing more rigorous stress-testing following this review. We would also like to see it start saving the OC profile to the motherboard memory for easy recovery.

Paired with the CPU is a dual-channel 16GB DDR4 kit from HyperX’s Predator line running at 3,000MHz. This is the right choice in our eyes in terms of capacity and speed, but Cube does offer a 32GB system for £180 more if you feel you need it.

CPU cooling duties are handled by the NZXT Kraken X62, a fine selection that makes use of the 140mm mounts in the chassis roof. The pump unit has attractive RGB lighting, and the logo and ring lights can be independently controlled, although sadly they are not compatible with Asus Aura Sync. Cube sets them to static blue by default, but it’s easy to use the CAM software to change this, and the lights can even respond to CPU temperature. You also get triple 120mm front fans and one 140mm rear exhaust, so there’s plenty of airflow. All four case fans are controlled by the built-in PWM fan hub for consistency.

The Asus GTX 1080 Ti Strix is a brilliant card, although we’d prefer to see the overclocked version given the choice. Nonetheless, you get swathes of features, and the RGB lighting is synchronised properly with the case and board. Other GPU options includes the GTX 1070, GTX 1080 (both Asus Strix modesl), and, interestingly, no GPU at all. This may seem odd, but it gets the system price down to £1,800. If you’ve been tinkering away on older Intel quad-core hardware (like so many of us) but have upgraded your GPU recently and are just interested in a move to hexa-core, that could be a pretty compelling option.

In terms of storage, you get a Samsung 960 Evo M.2 500GB SSD for primary operations and a 2TB Seagate Firecuda SSHD for good measure. We’re not sold on SSHDs, especially for bulk storage, but the £30 premium over a regular 2TB HDD isn’t much in the scheme of the overall price. Internal 2.5” trays and additional 3.5” trays can be used to install more storage.

Sadly, Cube made two silly mistakes with the storage setup. Firstly, it opted to use the M.2 port that has no heatsink rather than the one above the GPU which has one. The 960 Evo is single-sided, and even if most gamers won’t be doing intense enough operations to hit thermal throttling, there’s no reason to take the risk. Secondly, Cube connected the SSHD to one of the SATA ports that shares bandwidth with this M.2 slot, which forced the drive into PCIe x2 mode, effectively halving its available bandwidth. In Cube’s defence, our review PC was made early, and Nighthawk systems made since are confirmed as having the issue remedied and transfer rates that match what you would expect from the hardware, but it’s an unfortunate and needless mistake all the same.

The Corsair RM750x is another good selection with its 80 Plus Gold rating and fully modular cabling. It will have easily enough juice for this system, although you might need a step up in wattage if you have SLI GTX 1080 Tis in mind at a future date. 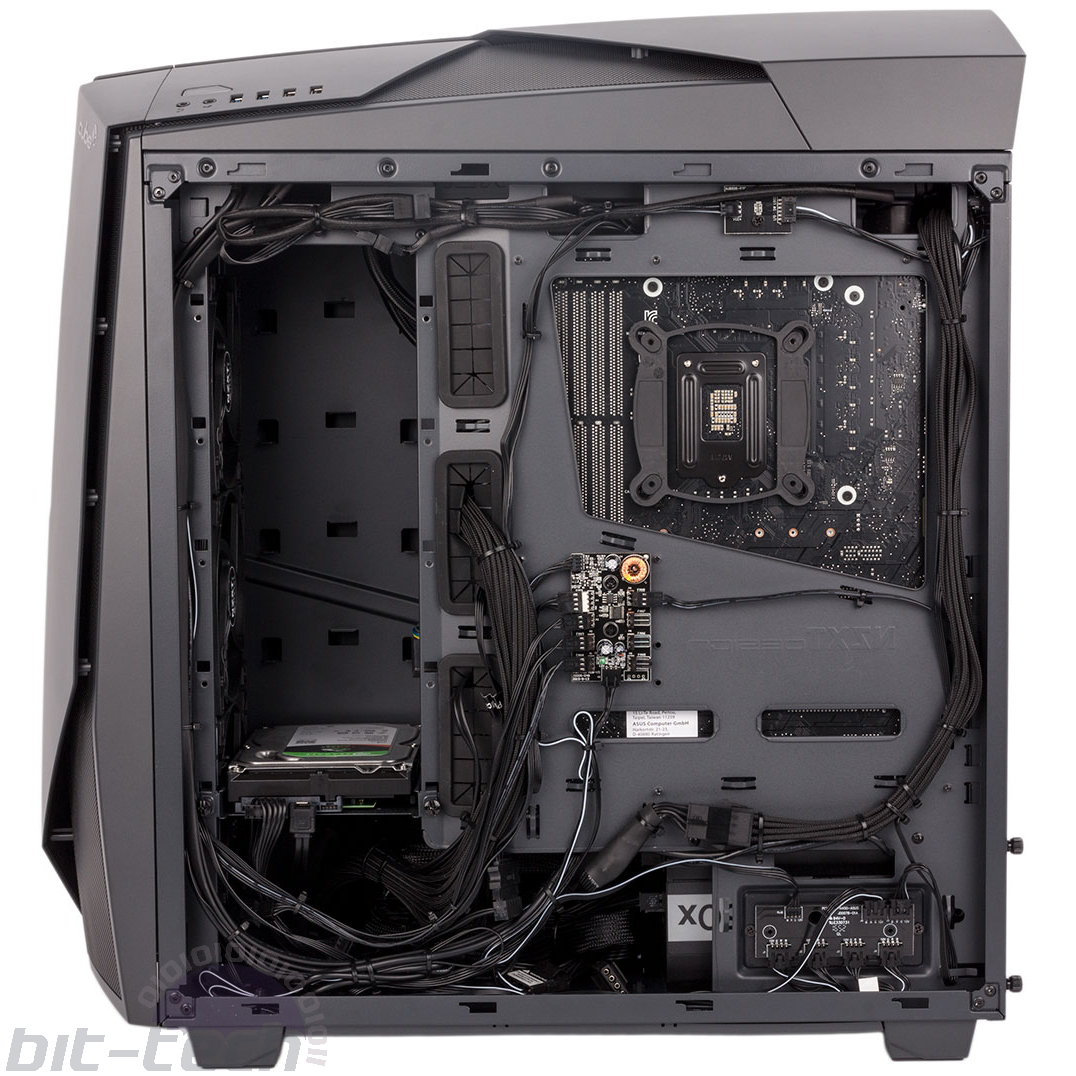 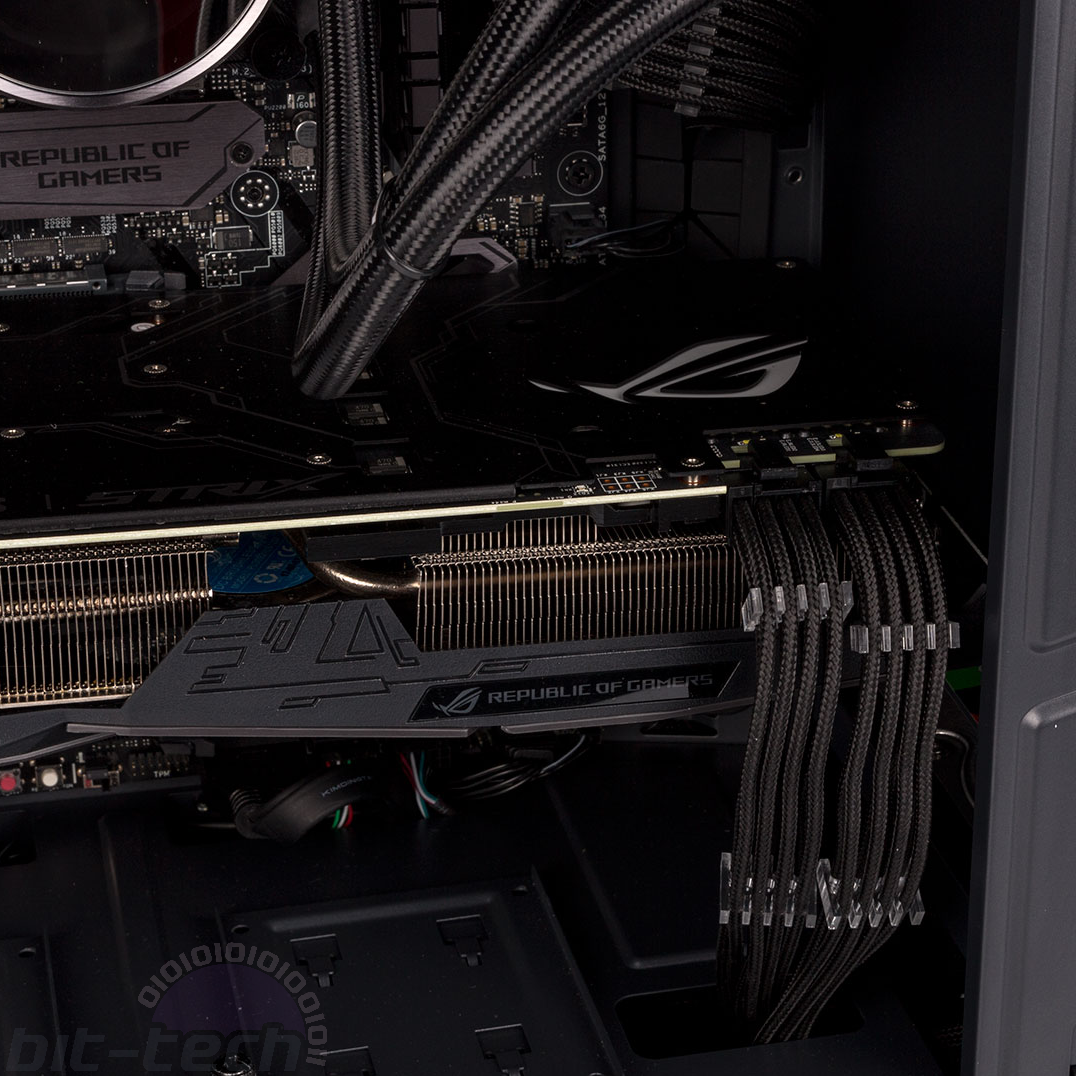 Cube has done well with its cabling, although it is also helped out by the PSU cover. It has opted to use some black braided PSU power cables too, and the cable combs on the 24-pin and PCIe cables are a nice touch.

The Windows 10 Home installation does come with a few programs that open when logging in, but Bullguard is the only one we’d consider annoying. The others, like NZXT Cam and Asus GPU Tweak II, are directly related to the installed hardware, and are easily removed or disabled if you don’t want them. 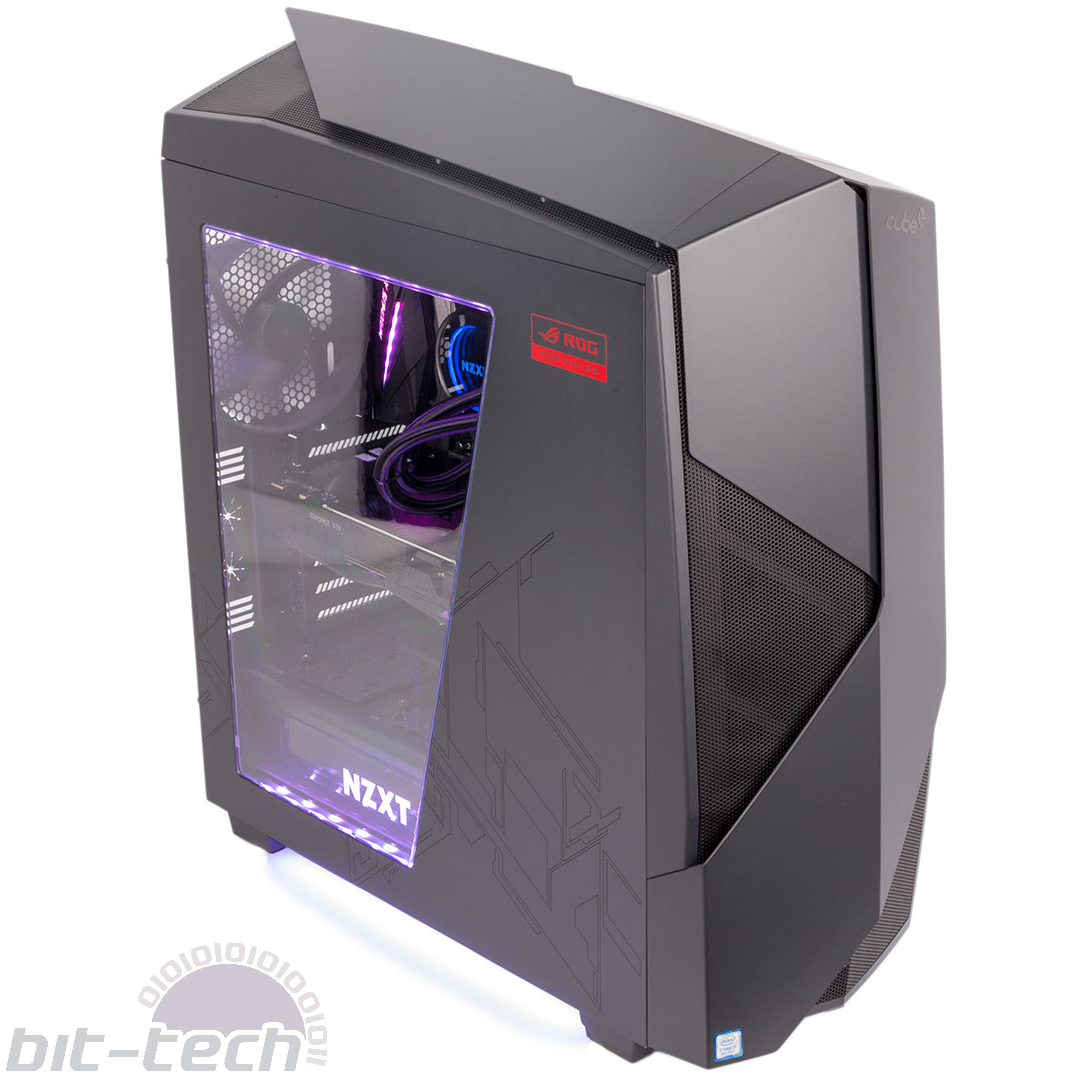 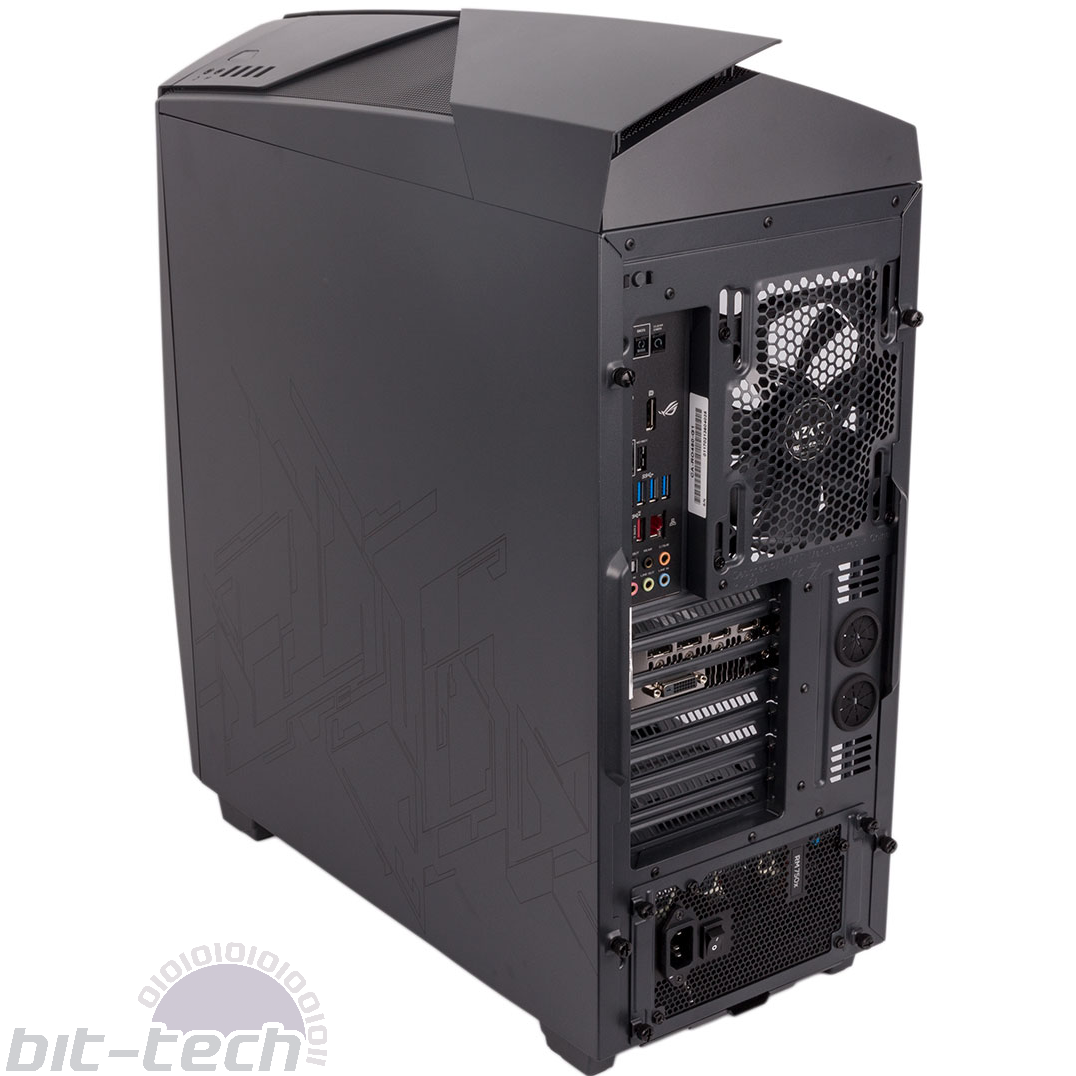 The Nighthawk ships with a three-year warranty, and this covers everything: carriage, parts, and labour. This is a very strong offer that brings Cube in line with the best warranties out there – many only offer carriage and parts for a year or even less sometimes. The system arrived well packaged, although the internal protective foam did leave a small series of marks on the inner side of the case window – these are easily removed, though.