This new wireless mouse from Corsair forms part of a broader wireless peripherals push off the back of CES 2018. The Dark Core RGB is available for £85 for the normal version or £95 for this SE one, with the only difference being added support for wireless Qi charging for the SE. 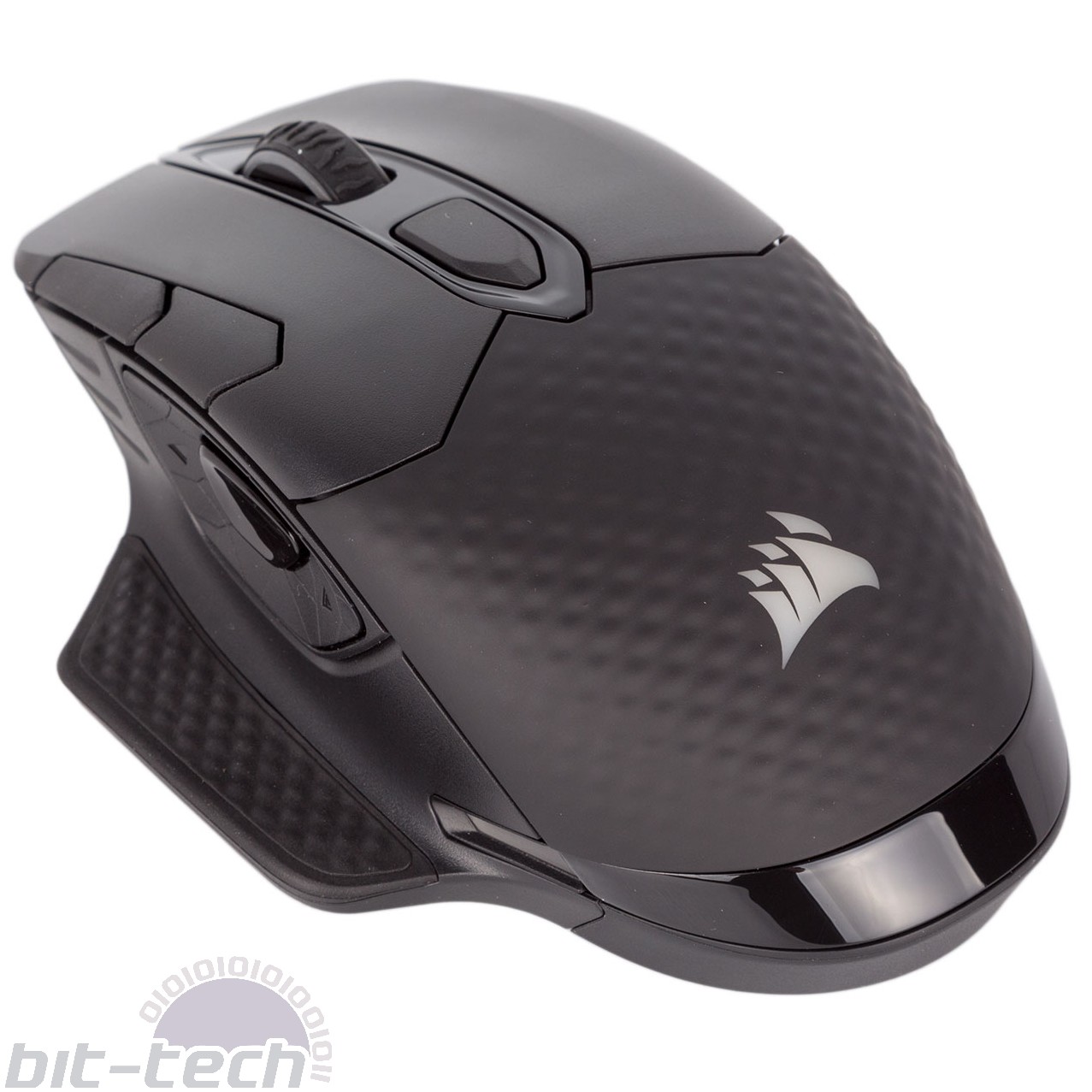 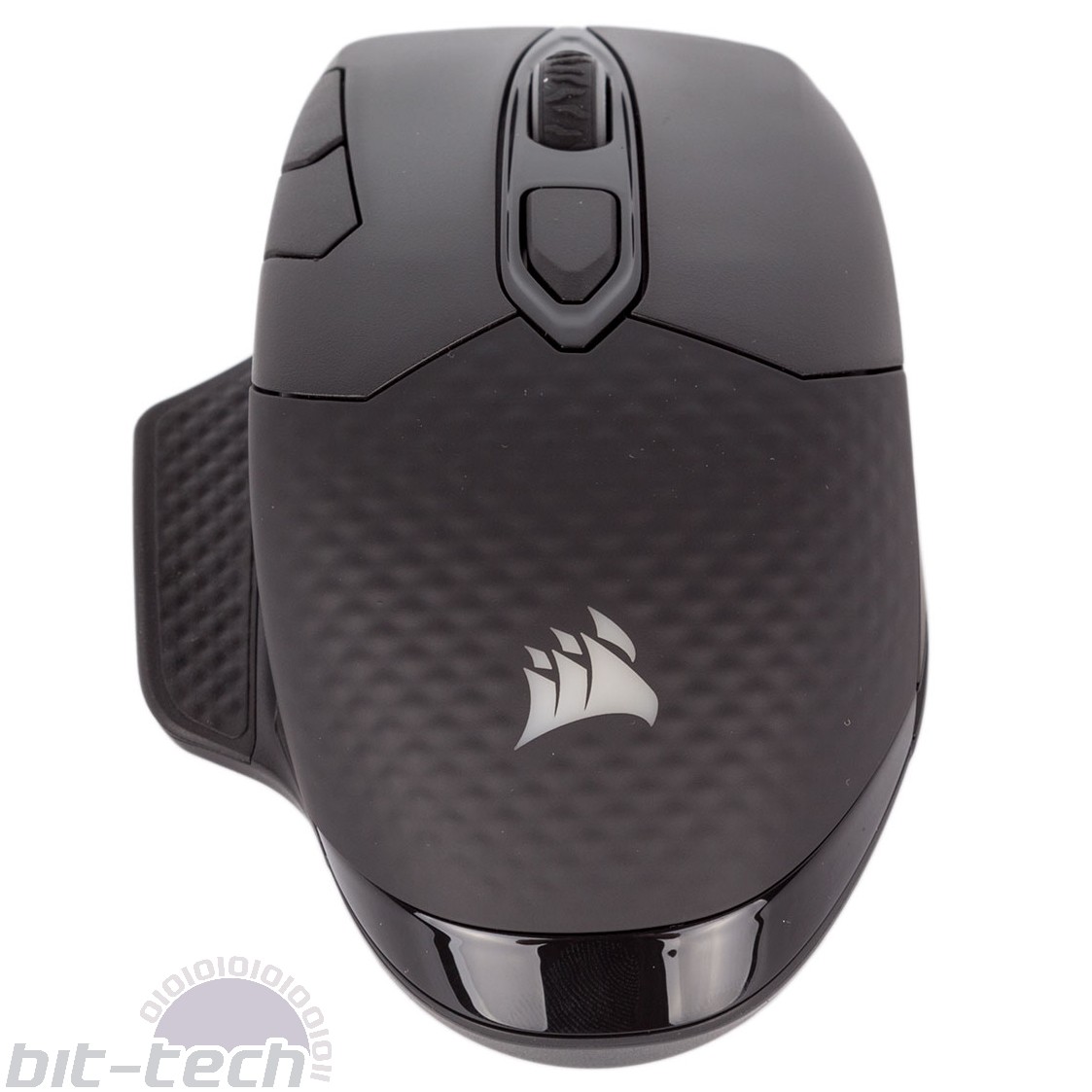 Qi charging is incorporated, unsurprisingly, into the Corsair MM1000 mousepad that was announced at the same time. We show it below purely because we were sent a sample, but it is sold separately to the mouse and is not a focus of this review. 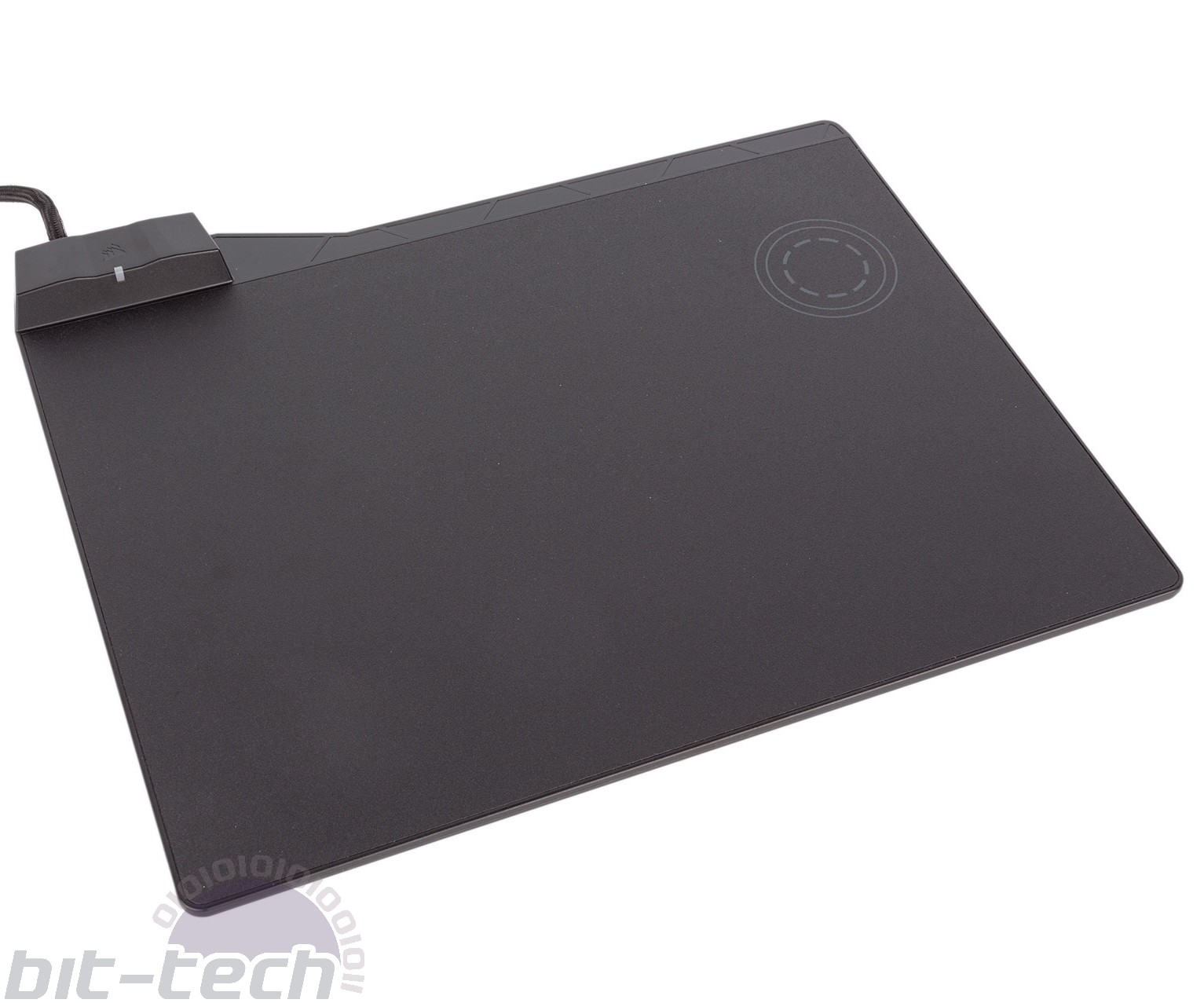 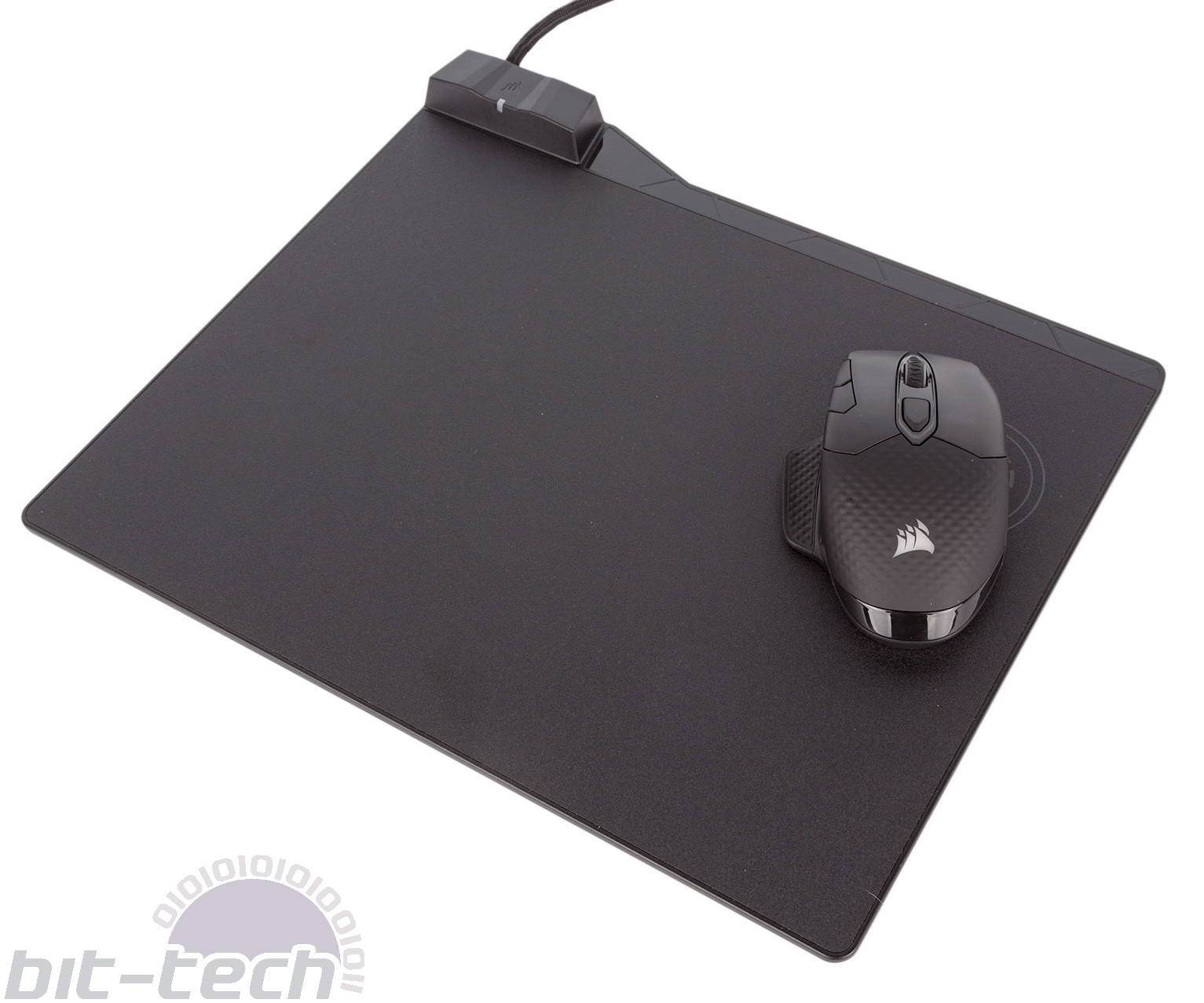 Back to the mouse itself, this is a rather large rodent that's very hand-filling. Despite this, I found that a palm grip was actually pretty disappointing to use. Firstly, my thumb did not reach the furthest forward thumb button. I don't have large hands per se, but I rarely experience this issue, and it's a big disadvantage considering I use the back and forward buttons very often. On the other side of the mouse, I immediately noticed that the edge of the right button has a noticeable and sharp edge that quickly became a nuisance for my ring finger. 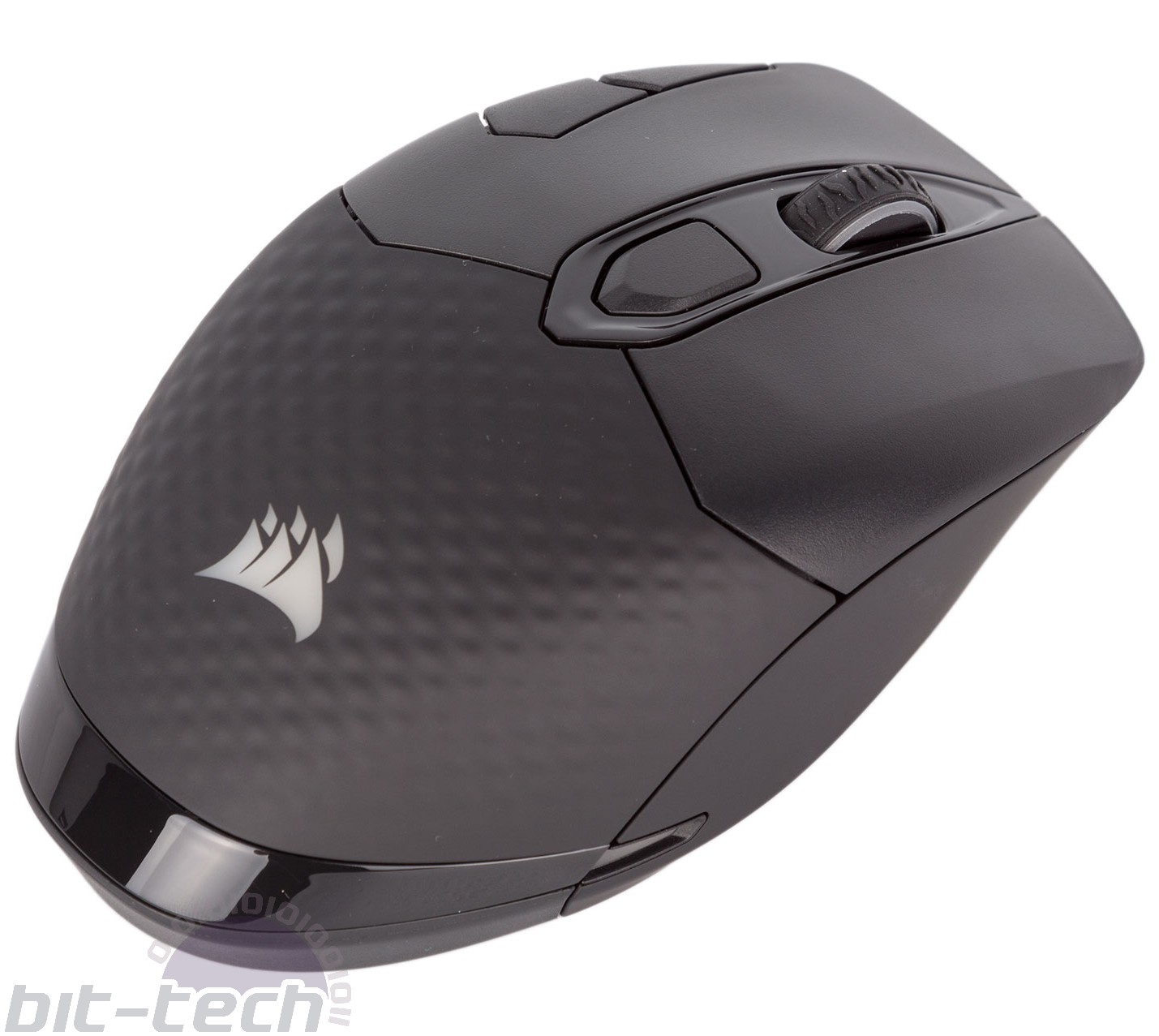 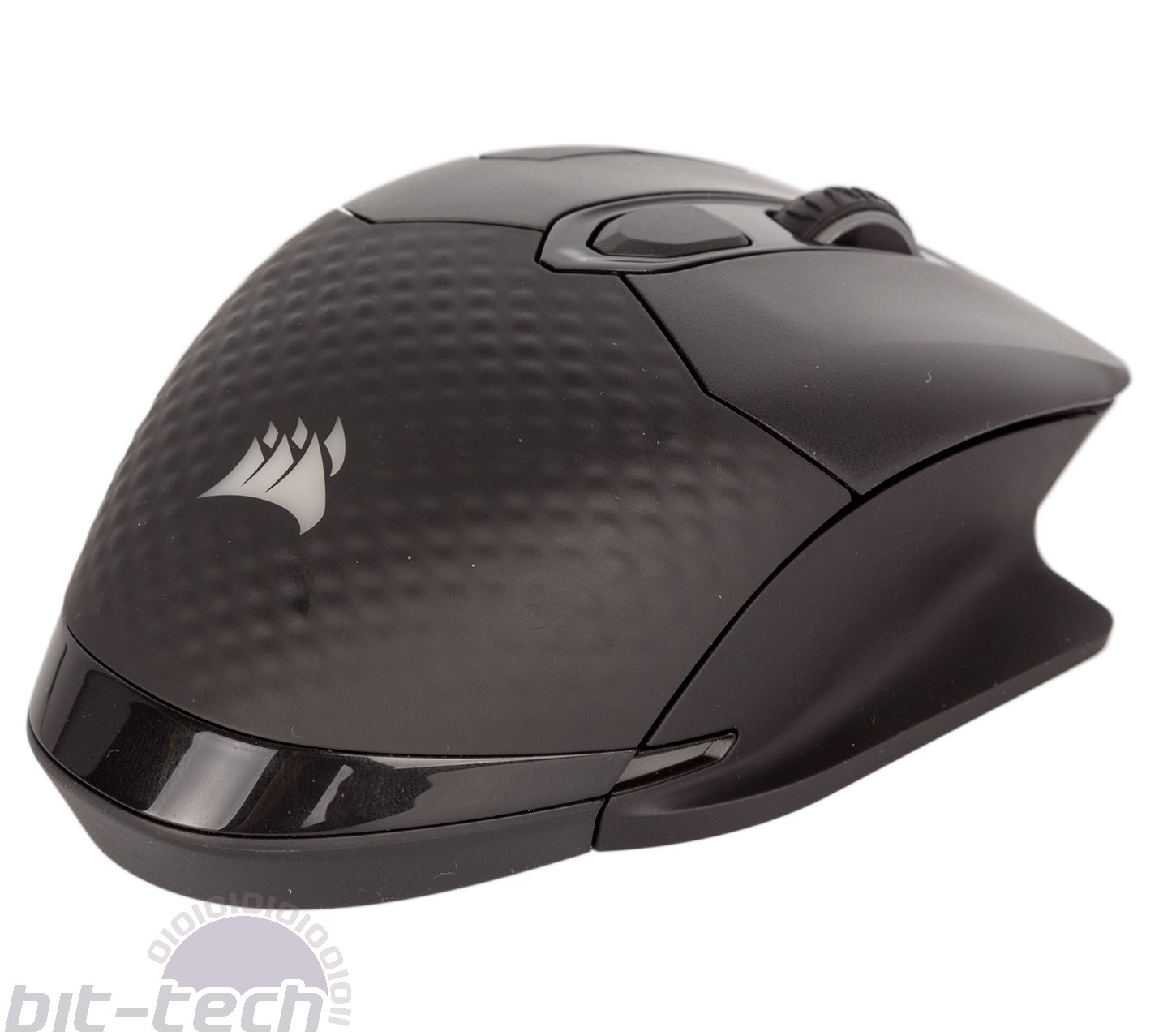 The right side of the mouse is swappable, though, so I swapped to the alternative that has a platform for additional ring/pinky support. This is easily achieved, and the magnetic attachment mechanism is strong. Doing this helped, as I was able to switch to something closer to a claw grip, which in turn gave me more leverage to reach that pesky front thumb button. It had the added benefit of letting me curl my ring finger such that the button edge issue was mostly (but not totally) avoided. Still, I can't say I'm that impressed by the shape and design of this mouse, but this is certainly an area where your mileage may vary.

The scroll wheel and main buttons are harder to fault. The former has a stiff clicking action but a nice rubber surface, decent resistance, and notches that are obvious. Omron switches with a 50-million click rating are used for the main clickers, and these are as good as ever. The DPI adjustment buttons on the edge of the left click are quite far forward and require a bit of awkward stretching to reach. There's also a profile switch button behind the scroll wheel, and this is nice and large. The central thumb button (which defaults to a sniper/DPI clutch) is very easy to actuate, but the back and forward controls either side of it are stiff and embedded into the chassis in a way that makes them difficult to work with. All nine buttons are available to reprogram through the software, which is discussed over the page.

The build quality here is high. Since this is a wireless mouse, the 128g weight isn't surprising. Something that's a little odd, though, is the use of three different external surfaces: smooth matt plastic on the main clickers and right side, smooth soft-touch plastic on the right side (both parts), and textured soft-touch plastic on the main body and thumb rest. That said, in use, I didn't find this jarring, and the textured parts give you more grip. Another material of note is PTFE, which is used in generous amounts for the feet.

Underneath, we find two switches. One is a simple on/off toggle, while the other swaps between 2.4GHz and Bluetooth for wireless connectivity, with the latter enabling direct connectivity to laptops without taking up a USB port. With the tiny wireless USB dongle, we made an immediate pairing, so setting up shouldn't pose any problems.

Unless you use the MM1000 or another Qi charger, you'll need to connect a cable directly to the mouse at some point in order to charge it. Supplied is a 1.8m USB to micro-USB cable for this exact purpose.

Corsair also supplies an adaptor that turns the micro-USB header into a female USB port, so you can essentially turn the cable into a pass-through cable. In fact, if you connect the wireless dongle to this adaptor, you can just unplug the adaptor/dongle combo whenever the mouse runs out of battery and connect the cable directly to the mouse. This is a pretty inelegant solution, but Corsair is clearly hoping that you instead buy the MM1000 mousepad as well, which would allow you to plug the dongle into its pass-through USB port and easily keep it charged without plugging it in.

Mouse lighting is split across three main zones: rear logo and side strips, thumb button, and scroll wheel. There's also a three-LED multi-purpose zone in front of the tip of your thumb which is used – via different effects and colours – to indicate the current profile (out of three onboard), DPI setting (up to three per profile), and charge status settings to users.

Regarding battery, Corsair's materials claim a 16-hour battery life with standard lighting effects and up to 24 hours without them. It also says that the mouse can be fully charged in two hours and 15 minutes. The Dark Core RGB can automatically enter a sleep state after a user-defined number of minutes, and users can also manually toggle a Power Saving Mode that disables all lighting and turns the multi-purpose zone into a flash indicator rather than a static one, minimising the time that the LEDs are powered on.

The PixArt PMW3367 optical sensor is what's at the heart of the Dark Core RGB, offering a maximum resolution of 16,000 DPI and adjustable in 1 DPI steps. Similar sensors are used in numerous high-end mice these days; all appear to be different variations of the same core sensor. While the specifications are impressive, Razer used a very similar sensor in its 2015 Mamba mouse – it had a two-year exclusivity deal on this at the time, so the timing of the Dark Core RGB makes sense viewed through that lens.

All variations of this sensor that we’ve seen have impressed, and it’s no different here. Tracking is excellent across the realistic DPI range, and I never noticed any unwanted effects. I also wasn’t able to note a difference between wired and wireless modes, even in fast-paced games, although I don’t claim to have any heightened perception in this area.

Want a mechanical keyboard for gaming but without the wires? Corsair has you covered.